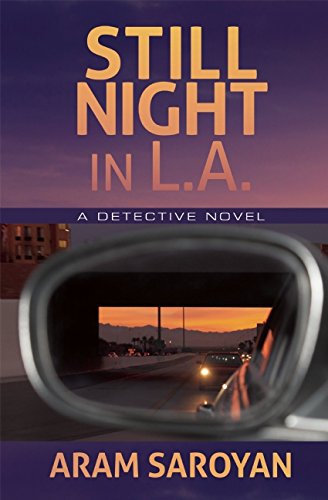 Aram Saroyan's new book, Still Night in L.A., will be out in a couple of days and it reminds me that you really can judge a book by its cover. This one has a moody image of descending evening below which we see a flaming sky in a rear view mirror.

The key words here are descending and flaming and Saroyan's prose weaves a tale between the two words, the two metaphorical worlds of fire and ice. Another way of saying it would be darkness and light, day and night, coming and going. This is a complex novel about dark actions between a small number of complex people, all of whom are in, one way or another, some deep trouble they've created for themselves.

Saroyan is classically deft at describing less rather than more. Still Night is an edgy and urgent mystery in which the more that is left out, the more we are caught up in wonder. Therein lies the tension of the novel. The need to know and the author's smart dodge, leaking only what he wants known, one page at a time. Not surprisingly this is what all great detective novels do.

She was tall and striking with a face that betrayed her youth more than she probably realized.

That sets the tone because every character is less, and then again, more, than what is exposed to the eye. Each character cracks in a certain way. The novelist does this lightly, and intuitively.

Deeper into the novel you may find yourself laughing. The humor is dry, very dry. But it's always there.

One last note ... there are some classy, and once again, moody, photographs introducing each chapter. I haven't seen this done in recent years and the reason may be there are few enough photographer/mystery writers with an eye as sharp as Saroyan's. In this case the photographs are like the story itself. So well-crafted you may go back and look again. And again.

Posted by Gerald Hausman at 1:09 PM No comments:

pocket parrots, a pocketful of miracles 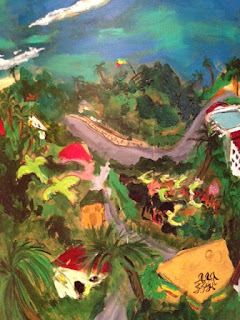 In a parrot tree there is a family of pocket parrots. We watch them with the many students of our summer camp in Port Maria, Jamaica. I ask the students to write poems about the tiny, green-leaved, emerald-winged birds, and they do. They write beautiful poems.

And this is the one I wrote with them on that day in August when the pretty pocket full of miracle pocket parrots flew from their nest for the first time. The next day they were gone.

The pocket parrots come to the edge of their hollow almond tree,
a nestling, nook nest, and I can hear their twitters and squeaks
and sharp notes of joy -- "Come, brothers and sisters
there is so much to say, to see!"

When they leave their nest for the first time this August
after Independence Day in Jamaica, I realize
we too will soon be going back to New Mexico.
"Look," I say to Lorry, there is so much
to see, to say!"