Some people you meet in The American Storybag are . . . 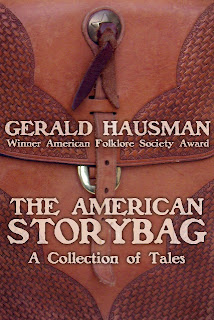 The stories in THE AMERICAN STORYBAG are a fleeting yet incisive look at
American life, primarily on the road, but sometimes on or in the water, and have been
collected by Gerald Hausman since 1965. Some of the tales are very brief and may be
called "sudden stories". Many of them deal with human survival - an autistic boy lost in a
trackless swamp; a young woman who falls in love with a supernatural creature; a young
man who finds himself by finding his horse. Some of the tales are mere messages left on
a cell phone. Others, like the story Bimini Blue tell about a Navajo healing ceremony
given to a famous author who committed suicide. There are stories of ghosts, demons,
fearsome predators, and wise old men who take the innocent in hand and lead them on
the road to wisdom. These are tales of innocence and anguish, fantasy and fable, humor
and heart. In them we hear the voices of a lost America - an America of folk heroes fading
fast from view and crying out to be heard.

"Not since Mark Twain has a writer presented classic American storytelling
so honestly. Hausman is at his best with this collection, truly entertaining."

- Hilary Hemingway, author of Hemingway in Cuba, on The American Storybag


"...it [Tunkashila] is like the wind one hears on the plains, steady, running,
full of music."


"...an eloquent tribute to the first great storytellers of America."

- The New York Times Book Review on Tunkashila
Posted by Gerald Hausman at 7:47 AM 1 comment: 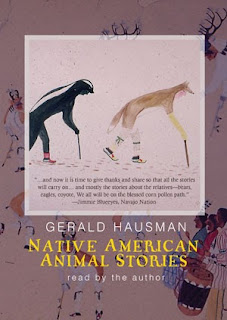 In these gather-around-the-fire tales, we learn how Nuthatch sprinkled dust and the people's hair grew white, and there was such a thing as old age.  Old Man Gopher brought toothache into the world.  The people's teeth were white as white corn, but Gopher visited them and then they had toothaches.  Horse, we learn, is a slow-footed fellow.  But he becomes fast when Butterfly brings him the fast flints from Flint Mountain.  These are the stories that tell us not just how it goes but why it goes.  These are for sharing, healing, and just plain smiling.

May we all be together on Corn Pollen Path.
Posted by Gerald Hausman at 10:52 AM No comments: 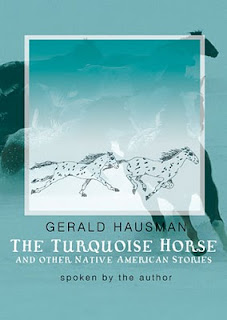 I began writing the stories in The Turquoise Horse in 1974 in Tesuque, New Mexico.

The idea didn't come from my imagination.  It came from my friend Jay DeGroat.  In 1965 Jay told me about a mysterious pinto horse that he had spent months tracking and trying to get a rope around. but the horse always got away.  And then he told me about the five horses of the sun.  One for each color of the day and the night.  The turquoise horse was a midday horse, blue as the sky at that time of day.  The dark horse was a nighthorse and stars shone in his mane.

I sit upon a turquoise horse
at the opening of the sky . . .
My horse walks on terrifying hooves
and stands on the upper circle of the rainbow
with a sunbeam in his mouth for a bridle.
My horse circles all the people of the earth.
Today I ride on his broad back and he is mine,
tomorrow he will belong to another.

Posted by Gerald Hausman at 10:20 AM No comments: 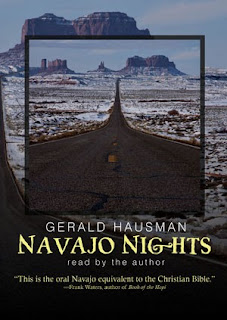 In 1985 jazz musician Ray Griffin and I tried recording this audio book in Abiqui, New Mexico.  We were in a canyon and there was a great echo there.  But Echo stole the stories.  If it had been Rainbow, the colorful one, it might have been different.  But Echo is a loud person and very possessive of sound.

Where do we record this? Ray asked.

We tried various places -- his studio and another backroom studio of a friend of my brother's.  The recordings did not come out well.  Finally, Ray was visiting our house in Tesuque, and he went into the downstairs bathroom.  This was in the deepest part of the passive solar house, buried 22 feet under the earth.  Jay DeGroat, my Navajo artist friend, painted a howling coyote on the south wall of the bathroom.

Here, Ray Griffin said, is where we'll record the stories.

Every one was recorded in that holy place, the bathroom, under the ground, in the First World.
Posted by Gerald Hausman at 7:03 AM No comments: 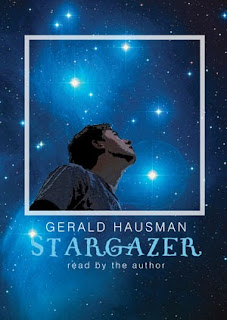 For a while in the 1980s the most popular story on this audio book was "Star Car."  This story was told to me by Jay DeGroat's father, a medicine man on the Navajo reservation.  A tiny automobile that circled the earth as a comet and appeared in the desert as a flare of light.  A small man inside the car drove it all around the sandy arroyos.  The car was only five inches high.  Jay's father also told me about Skinwalkers and how they traveled fast as light, quick as a star car.  He drank the coffee I made from boiled coffee beans cooked over a fire in the old way.  He was a small man in a big black cowbiy hat.  He said a blessing over the house we lived in.  Then he went on his way.  One of the stories I recorded was begun in 1965 and the ending wasn't told to me until 1990.  When I asked Jay (translator of all the stories) why it took so long for his father to tell me about Locust's bow and the arrow that opened up the underworld into the world of light, he said, "Snow on the mountain top."  By which he meant two things -- the white hair I now have on my head and the snow on Mount Blanco (Sisnaajini).  These are winter stories and that is the traditional time to tell them -- after the first frost.  Listen well, you may yet hear the twang of Locust's bow.

Thanks to Ray Griffin for the music and the weird sounds and Kurt Mueller of Speaking-Volumes for bringing these back into circulation.  May you both walk on corn pollen path.
Posted by Gerald Hausman at 6:42 AM No comments: 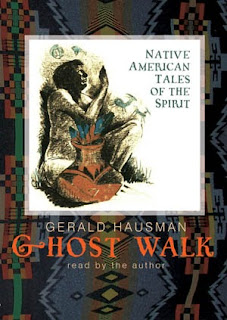 This newly released audio from Speaking-Volumes is subtitled Native American Tales of the Spirit.  That idea was suggested by a Havasu friend, deep in the heart of the Grand Canyon where the stories were lived, witnessed, seen and heard.  I just opened the book to page 77 and found this line -- ". . . she named nine things that she loved: the river, the toads, the wrens, the pebbles, the wolf, the trees, the sun, the canyon, and most of all, the morning."  On the next page is a message that I saw posted on the community bulletin board in the village of Havasu: "White people will give up digging for uranium when mother earth's heart stops beating."  There are spirits moving in and out of this book and the audio is all the more ambient and other-wordly for Ray Griffin's enchanting music.  Cicadas come and go in the desert heat.  Owls call.  I remember diving underneath Havasu Falls and hearing voices.  And hearing the corn-carrying woman whose basket was round in her arms as she walked by our tent.  She wasn't a ghost; she was a presence.  For as the book tells us -- among the watercress and wild celery, the cattails and watersong, Spirit prevails.  Havasu is a place where earth, water and sky meet.  A place where you are in the center of all things.  Your inner-self expands, floats high above the red rocks with the canyon wren.
Posted by Gerald Hausman at 8:15 AM No comments: 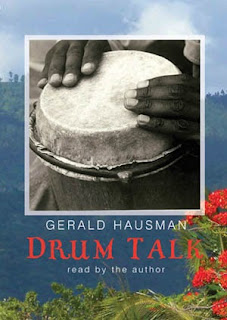 From 1985-1993 our family stayed every summer at Blue Harbour in Castle Garden, Jamaica, 14 miles on the double bendy road, the ziggy ziggy road up from Ocho Rios and a few miles from Port Maria and there it was, the old white block house that was once the home of playwright Noel Coward.

So this is where we spent our summers -- running an excursion camp for teens on the North Coast.  A sort of outward bound, journal writing school for which Santa Fe Preparatory School gave us our accreditation. Our students were Anglo, American Indian, Latino and Jamaican.  Our teachers were  Jamaican.

One year we followed the world of Jamaican drumming.  At night we listened to the Pocomania church drummers, with their conga echoes of Africa. Another time, junkanoo drums.  Jonkonnu.  John Canoe.  In the streets -- "dem a loot/dem a shoot/ dem a wail."

I remember a drummer showing us how to rid a house of ghosts by drumming them into the far, flat distance of the Caribbean sea.  Sometimes at night the rain on the zinc roof drummed its own tropical riddim and I always thought of Bob Marley: "The rain doesn't fall on one man's house alone."  And down with the rain came the almonds off the almond trees.  And they drummed too, and you could crack them open and eat them in the morning while the croton leaves glistened with raindrops in the sun.

Drum beats in the hills of St Mary.  At night, in the white owl pimento wood, drums.  In the day on the concrete jungle streets of Kingston, drums.

In the mind, words and drums, drums and words.

So I began recording the drummers we heard.  Some drummed on blackened, bottom-up pots and pans, anything to make riddim.  Some drummed burra style on goatskin repeater drums.  The repeater, funde, bass. Sometimes a whole bamboo forest clicked to the tune of the island wind.  Natural mystic drumming.

Some rapped, ripped, rode upon their words like hill and gully donkey, up hill and down hill, singing all the while.  Rushing words like rivers.  Grumbling drums like thunder.

A Jamaican zinc fence of sound, one man said.

Word, sound and power, said another.

As we gathered by the river and collected the songs, stories and poems for DRUM TALK.  Being there, listening and playing, talking to people like Bob Marley's old friend, Georgie -- "Georgie would make a fire light/as it was logwood burning through the night."

Of which I'll share with you . . .
Drum Talk, just released by Speaking-Volumes.
Posted by Gerald Hausman at 12:54 PM No comments: