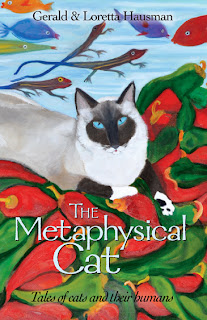 According to an ancient myth, there was a mother cat present when the baby Jesus was born. There, in the dove-cooing softness of the manger, kittens were born and a cat did purr. And, it is said, that this sound has been a blessing ever since.

There are many stories about Jesus and his love of animals - especially cats. In one such tale, Jesus finds a young cat upon the road. She suffers from neglect, but Jesus speaks soothing words to her, and carries her to a village where she is fed. Afterwards, he gives the cat to a disciple, a poor widow. It is she, the story goes, who is blessed by this cat's peaceful purr.

The widow then asks Jesus, "You care for all creatures - are they not your brothers and sisters, that you love them so?"

He answers, "Verily, they come from the great household of the Father, and they draw the same breath that you draw. And whosoever cares for the least of these, and gives it food to eat, and drink in its need, he shall do the same unto me."


Such a thought touched the famous explorer, Lincoln Ellsworth, in 1935, as he flew over Antarctica, some two thousand years after Jesus' birth. Traveling across the frozen tundra of a world untouched, and even unsought, by humanity, Ellsworth wondered what fate had brought him on such a lonely mission.

As he soared above the glittery waste, unfit for man or beast, he wondered, "Why am I here on this Christmas Eve?"

Yet over the airplane's steady roar, he seemed to hear a gentler noise. It was the solitary purr of the cat he'd carried with him on this, the first 2,300 mile, single-engine airplane flight over the Antarctic.

"Yes," he confirmed, "I brought along the right mascot for the trip, a cat that has given birth to kittens this very night."

So it was, that another wayfarer was blessed by the solace of a purr on that most holy of nights, Christmas Eve.

Email ThisBlogThis!Share to TwitterShare to FacebookShare to Pinterest
Labels: Painting by Holly Sedgwick

If you love storytelling the way we do ... if you love the Southwest ... if you love mysteries and often ask, Why is that? Well, you've come to the right book: Places of Mystery, Power & Energy by Bill Worrell.

That name should ring a bell, by the way. Worrell is very well known in all the areas listed above, but he is also as down-to-earth accessible, funny, and biblically wise, literarily informed, and just generally fun to be around and to listen to. Anything he writes including brief emails and spontaneous poems is funny-bone wonderful.

We ought to know, we published Worrell's latest book, and we're so glad we did. This is our 14th year publishing Irie Books and selecting what we consider to be some of the best of the best, of which Worrell is definitely one. Imagine a campfire on the Llano River, then visualize some old timers sitting around it. When I close my eyes I see Will Rogers, Mark Twain, Ambrose Bierce, Rod Serling, and Dante, just back from the shadowlands, but, look, over there, the one who's entertaining them is none other than Bill Worrell, and he's no shade, hant or shadow, he's the real thing, a cowboy philosopher with a bit of Bret Hart, John Billings, J. Frank Dobie ... there I go again! That's because I just love the way Bill Worrell spins a good tale, and this new book is filled with nothing but laughs, ruminations, and rummages in the dustbins of folklore and science.

He covers such miracles of nature as the mystery of the Lubbock Lights ... the search for man's beginnings in the caves and cliffs of the Lower Pecos ... the vortexes that surround the red rocks of Sedona ... the picky little editors who inhabit the author's historic house -- they turn out to be nibbly house mice ... the ghosts in the walls of his guesthouse, Medium Cotton (we've already booked our visit!) ... the rattlesnake whisperers and bridge jumpers and all-around geniuses that Mr. Worrell calls friends, and he's got a lot, let me tell you!

I would buy this book just for the pictures and the philosophy. When you see Midge wearing a rattler for a hat -- not a hatband, the whole rattler -- you just have to read the story:

I have a photograph of a young man named Midge Davis while he was in front of the store with a rattlesnake coiled upon his head. Midge died of a rattlesnake bite a couple of years later. He was playing with what is called a "high striker". It got him in the arm two times as he was attempting to remove it from a toolbox to show it off. "Let's get you to a doctor," said one of his friends.

Let me have a beer first," he replied. After a few sips, he said, "You boys better get me to the doctor. He got me worse than I thought. I'll be dead before you can make it, but try anyway." He was dead before they got him to the doctor. 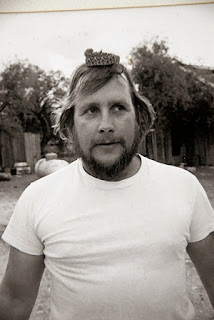 Bill Worrell writes like it was as natural as breathing, so I would recommend this book to anyone interested in how to make sentences pull you in and keep you there. If you don't read, I would recommend that you join Bill around the campfire ... who knows who you'll meet there.
Posted by Gerald Hausman at 8:49 AM No comments: