Earth Day: Down with Phlamco and GMOs 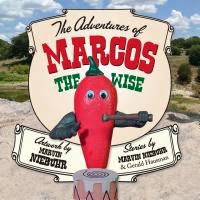 In celebration of Earth Day, please buy a copy of The Adventures of Marcos The Wise by Marvin Niebuhr.
A large portion of royalties goes towards defeating "fake food." This is Marvin's mission.

Marvin's friend, Marcos Caliente, is a chile pepper, and also a shaman. So far the score is Phlamco Industries 0 and Marcos Caliente 3. But we're only in the early innings, there's much more to come.

Marcos doesn't use conventional weaponry against the industry that proliferates fake food and ignores the health of plants, animals and people. Marcos uses his friends -- the Chipotle Clan, a mystical group of peppers; the Wolf Clan and the Coyote Clan (highly mystical and musical); and let's not forget the Spokes-Pepper, Ignacio, the worldly, well-spoken Chipotle storyteller. This is the team that will defeat Phlamco, the dangerous GMO Corp. and PhatKat, a selfish, single-minded politician (do you know any of those?)

We celebrate Earth Day with Marvin Niebuhr's inventive and funny -- but deadly serious -- children's book for all ages.

Don't blush, Marvin, but this is one of the best children's books on the real veggie market today!

So, here's to Marcos The Wise and his team of rough and ready vegetable outlaws!

(Buying more than one book on Amazon.com is greatly encouraged.)

Thank you for your cooperation,

P.S. Be the first person to find the spaceship in Marvin's book and you'll get a FREE subscription to the series of Marcos Adventures. More to come... 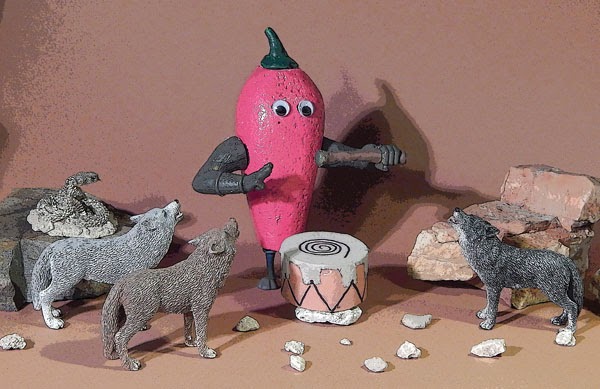 All art handmade by sculptor Marvin Niebuhr
Posted by Gerald Hausman at 10:19 AM No comments: 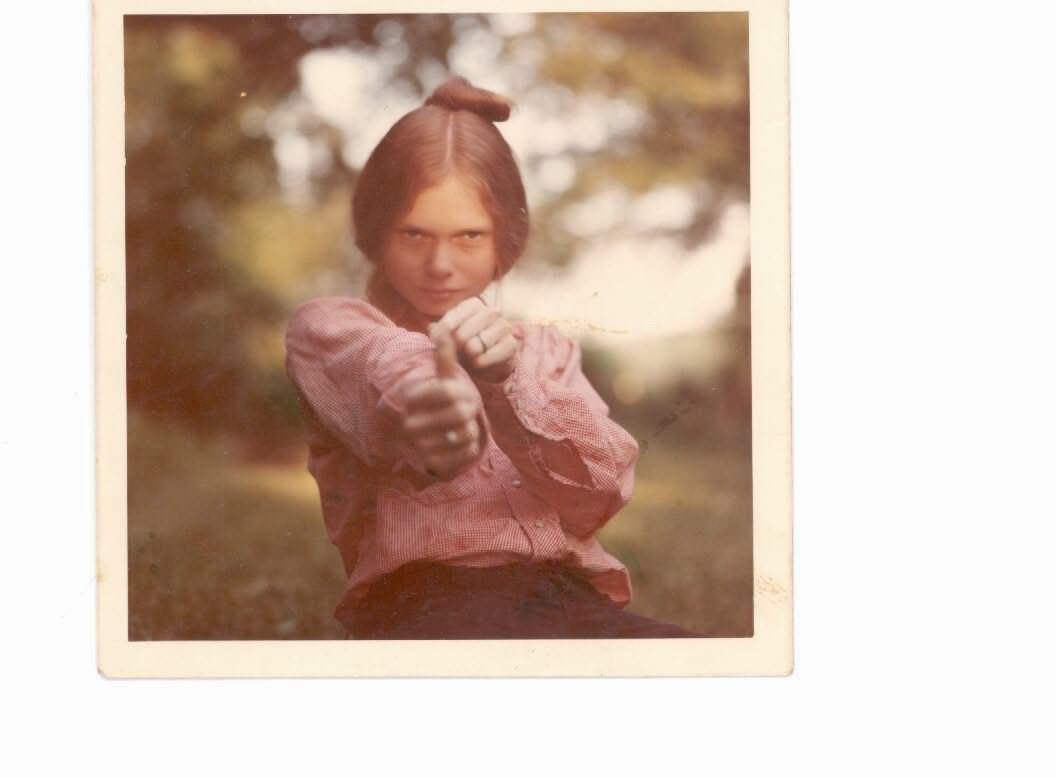 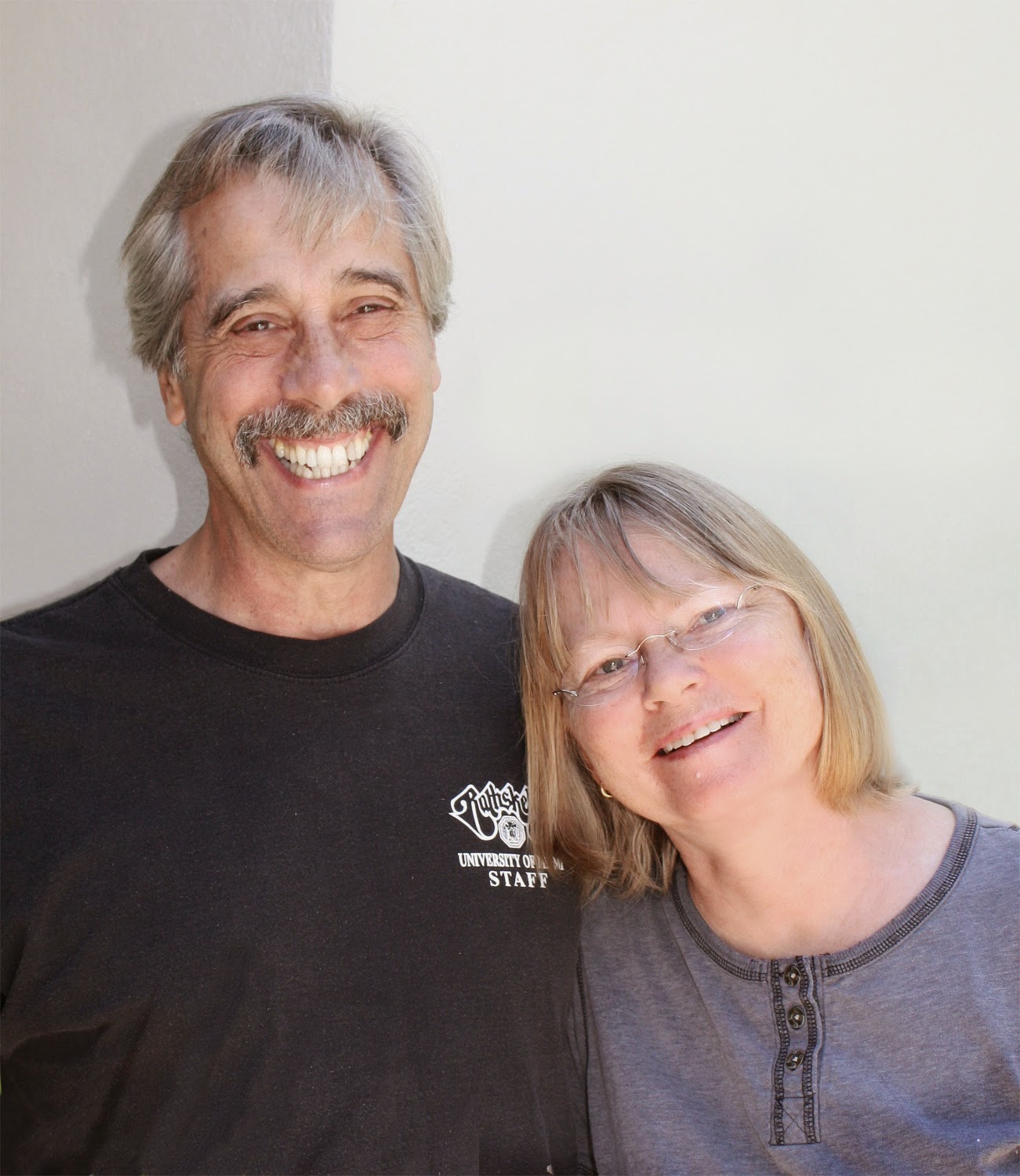 That's Lorry, age 7, on Destin Beach in Florida in 1954. She used to tell me -- as early as our first date in 1966, Holy Thursday, in Montezuma, New Mexico -- that she thought of herself as a "Florida girl" and that growing up near the beach was about as good as it gets.

The second pic shows Lorry, age 25, in the Berkshires of Massachusetts, 1972. We lived there for seven years. Mariah and Hannah were born there. She never thought of herself as a "Berkshire girl" -- the winters were too cold for that and there was no beach.

Number three: this was taken at our home for the past 20 years, Bokeelia, Florida. I finally got the girl back to the beach -- only, this island where we live has no beach, it's mangrove-fringed and heavily palmed, but no beach except the little one around our pond that the leopard frogs use.

So this is my tribute to Lorry because today is the day we met 48 years ago and I penned a poem for her ...


Loved her then
before I met her.
Loved her when
I barely knew her.
Love's not blind,
time proves truer.
Love's this poem
I've written to her.
Posted by Gerald Hausman at 8:01 AM No comments:

Carl Sandburg: Discovering Yourself at Age 50 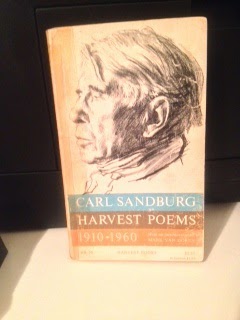 Carl Sandburg, the great American poet of the past century said that at age 50 there was "... some puzzlement as to whether I was a poet, a biographer, a wandering troubador with a guitar, a Midwest Hans Christian Andersen or an historian of current events ..."

I found a mint copy of The American Songbag, Sandburg's tribute to our national folklore in song, in a small library in Indianapolis. The librarian had no idea what it was and what it was worth. I told her, "Its worth is incalculable." She replied, "Maybe I shouldn't have it out on the regular shelves then."

Sandburg said as he got older, "I am more suspicious of adjectives than at any other time in all my born days." His writing became bare bones but the rhythm of it was uniquely Sandburg and I think he got that spoken music from the people he grew up with, the Swedish American storytellers whose pauses were full of meaning and whose phrases came from the ancient bards who recited the sagas and never missed a beat.

As he looked back on his life, Sandburg commented that he'd forgotten the meaning of "... twenty or thirty of my poems written thirty or forty years ago." He claimed that all his life he'd "... been trying to learn to read, to see and hear, and to write."

At sixty-five, he wrote his first novel. It took him five years to finish it.

Growing older still Sandburg became the sort of official poet laureate of the plains and along with Robert Frost, the greatest oral reader of poetry alive. Without Sandburg there wouldn't have been a Ginsberg or, for that matter, a raging pile of nonstop verses called Howl.

Carl Sandburg hoped to live to be 89, the same age of Hokusai. Sandburg's paraphrase of Hokusai's farewell to earth and sky ends like this: "If God had let me live five years longer I should have been a writer." Sandburg made it to 89 just as he wished.

I think some of our younger writers, God bless 'em, could learn something from old Hokusai and Old Sandbuggy, as I heard someone say. It gets better. It just gets better -- if you have the patience for it.
Posted by Gerald Hausman at 9:07 AM No comments:

If It Snowed Forever 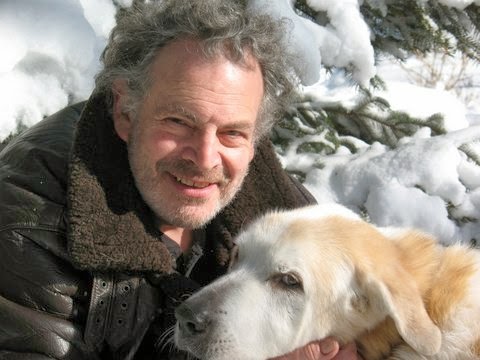 IF IT SNOWED FOREVER  by Fred Burstein and illustrated by Anna Burstein
Irie Books, 2014


Author Fred Burstein (Anna's Rain; Rebecca's Nap) has written an unusual novella about a young girl with heart trouble, a bus driver and a bunch of teens with social issues of various kinds that erupt in the bus on the way to school. This may sound like the prelude to a dystopian story of hopelessness and angst, but it is anything but that. The novella deals with real problems -- adult and teen -- but the beauty of Mr. Burstein's writing is his casual, conversational style which sort of meanders like the bus itself. In point of fact, the author was the bus driver. If It Snowed Forever is a one-of-a-kind story that proves that people can only achieve peace of mind by bonding and being compassionate. The early reviews from well-known authors say, " ...touching and life-affirming ..." David Kherdian and Nonny Hogrogian (Newbery Honor and Caldecott medalist authors). Paula Fox, a Hans Christian Andersen Award winner, praises the novella's characters. She says, "Jimmy is wonderful. His dreams, his inner life, his bafflement and yet his authority." Nancy Hickey, a Special Education teacher, says: "A story about students on a minibus who transcend usual adolescent behavior and compassionately bond with Marie, a girl with special needs. The reader sees through Marie's eyes and learns how simple gestures and small moments can change lives forever." If, in reading this short novel, you are changed for only a moment the story has done its work effectively, for as we know, books change lives forever in ways we do not always know.
Posted by Gerald Hausman at 8:25 AM No comments: