To plot or not to plot 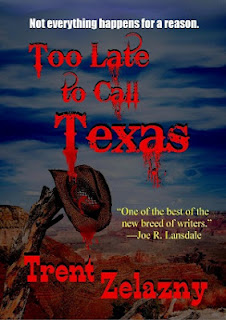 In talking about writing, William Saroyan once remarked: "What difference does it make what you call it, just so it breathes?"

Following this thread, novelist Richard Brautigan, wrote a raft of novels that reviewers sometimes called Brautigans rather than novels.

The old rules fall away, but one seems to stick.

The importance of plot. Somehow you can't get away from it. For plot is -- if not everything -- all but the kitchen sink. Come to think of it, we shouldn't leave out the kitchen sink either. Especially if it's doing some gruesome gurgling. We may need that gurgle to further the plot.

Which brings me to Trent Zelazny's new novel, Too Late To Call Texas.

Trent is a plotter not a plodder, and his novels breathe, as Saroyan said they should.

What makes this novelist's stories gripping is that the plot is "everyman in trouble" compounded with what has been called the "irrelevant detail."

Example: a guy driving on a lonely New Mexico road at night finds a cowboy hat on a fence. Curious, (as are we all) the driver stops to check it out. The hat has a hole in the crown. There is a sticky something there, too. Blood? Yes.

One question after another comes up, one after another, in this hell-and-gone masterpiece that might have been called a "yarn" in another era.

I call his novels Trents. Because they all have this similar ring of truth. Something obscure is happening and we don't know what it is, but we want to find out, and do. By then we're at the end of the novel, ka-ching.

Trents thrive on curiosity. The same that killed the cat. His cats are characters, and they do sometimes die for curiosity. But often, the irrelevant details mount up, and one little thing leads to another larger thing, all of them coming down to a greedy, sneaky, dangerous, leaky, eeky thing.

Don't read Trents on an empty stomach -- or a too-full one. When I read them, I tend to eat the same things his characters eat. Huevos rancheros yesterday while I finished Too Late To Call Texas.

If you're a writer, you need to take a look at a whole bunch of Trents.

If you're a reader, you should read them all, eating as you go, but look out for that unforeseen low ledge because it'll knock you off your horse.
Posted by Gerald Hausman at 11:29 AM 1 comment: 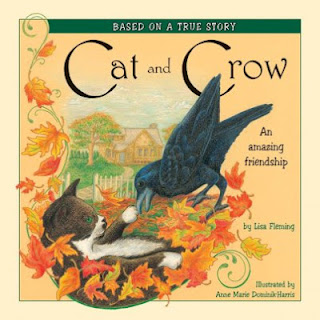 We recently did a column on unusual animal friends -- our parrot, George and our Great Dane, Zora. They are reluctant friends, really, because Zora accepts George's parrot affection but does not return it so much as permit it.

In the story of Cat and Crow by Lisa Fleming, it's different.

Moses the crow saves the life of Cassie the kitten -- not once but several times.

True story, well-told, showing how very different creatures overcome their differences -- or perhaps they didn't know they had any. If humans could be more like this we wouldn't have two-party poltical systems. But that is another story . . . .

It's not uncommon to find odd-fellow friends in nature. Animal moms frequently adopt babies from other species. We have seen feral kittens with raccoon babies, and the moms treat the cats as kits. And the kitties end up as cats that wash their food in water.

We once witnessed a very unusual friendship between an 11-year old boy and a newborn fly. They became, one beautiful summer day, "best friends."  But here's the unusual part: the fly refused to leave the boy's forearm. The boy fed the fly sugar water and such and the fly might leave the boy for a second or two, but it always came back and settled on his arm.

This unusual friendship lasted one week. Whereupon the fly got old and died.

There was, in fact, a fly-in funeral. According to the boy, other flies dropped by to pay their last respects.

What is most amazing is that we, as humans, somehow manage to believe that cats and crows and boys and flies live on different planets and have nothing in common.


Posted by Gerald Hausman at 9:00 AM No comments: