The Blessing of the Christmas Cat

From The Metaphysical Cat. . .


Thus to close the year and pass the blessing along . . . there is an ancient cat myth that says a mother cat was present when baby Jesus was born. In the dove-cooing softness of the manger, kittens were born, and a mother cat did purr.

And, it is said, this sound filled the manger with a song of blessing.

There are, indeed, many stories of this kind, proving the love of Jesus Christ for animals, especially cats. One such tale tells how Jesus found a young cat on the road during one of his pilgrimages. The cat had suffered terribly from neglect, but Jesus spoke soothing words to her, and he carried her to a village and saw to it that she was well fed. Afterward, he gave the unfortunate cat to one of his disciples, a poor widow, who asked the Master a question.

"Is this not some lost sister, that you love her so?"

Jesus replied, "Verily, she has come from the great household of the Father. And whosoever cares for her and gives her food and drink in her need, shall do the same unto me." 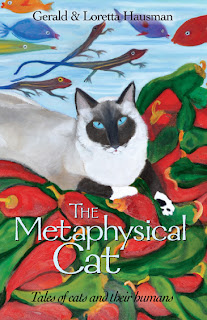 Roger and I were in Albuquerque in 1994 signing copies of Wilderness which had just come out.  A lady wearing a huge cowboy hat came up to us and asked us to sign her book.  While Roger was signing, she said, "Recognize me?" I gave her a pretty good stare, then said, "I'm sorry, I don't."  She turned to Roger and he smiled and shook his head.  The lady said, "Maybe this'll help" and she removed her cowboy hat. Neither one of us knew who she was, and she saw that. "I am John Colter's great-great-great niece," she explained. "Our book is a work of fiction," I said, "and I've only seen one photograph of John Colter, so I'm not sure if I'd catch any resemblances." Roger chuckled and the lady asked us to look at her ears. After we gave her ears a good look, she said, "Now do you see it? It was passed on down to me. I have John Colter's ears." "Indeed," Roger said, "I think you do."  That satisfied her. "You know," she mentioned, "I think you both got every little detail just right." She looked fretful, then shook her head. "Except for the ears." I suggested that we did not mention the ears because they never came up in the narrative. "And that's the problem," she admitted.  "Maybe you can put John's big ears in a later edition." Well, that new edition is now published after three previous ones in different languages, and still the ears go unmentioned. I hope she'll forgive us if we leave it that way.
Posted by Gerald Hausman at 11:07 AM No comments: