Too Wet for Words 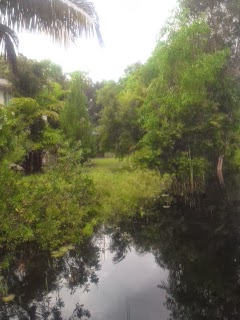 This bucolic yard scene doesn't tell the tale. But sitting on the dock in lawn chairs after days of torrential rain we watch tiny bass swim over our feet. The dock's under water. And this was the dock that the builder said was built for the Unsinkable Molly Brown. Now it's sunk. The shell road in front of our house is once again a highway for fish. Our neighbor says there's a bunyip in our pond. That's a mythological Australian monster. In reality there was a bunyip in our toilet and another one in our shower. I am not not kidding. I pulled one gorgon head out of the toilet line and another out of the shower drainage pipe. Each head was thick, ugly, knotted and large, and I had to pull hard to get it out. Each grew from the water-greedy, succubus root of a shefflera tree. No bunyip this -- but monster, yes! Indeed. And more to come -- cockroaches galore hunting for dry land. Giant toads hunting for cockroaches. Bee eating Cuban tree frogs gobbling African bees.
Paperwood trees unpeeling their scrolls of white newspaper bark. Acacia trees drooping to the pond's edge covered in bright yellow blossoms. Dark tannic water, the color of molasses. Thomas Edison's banyan tree  shrouded in green fox grape vines. (Yes, lightbulb man actually planted it and the one who built our house took a cutting and it has grown taller than our roof.) The yellow-crowned night heron tree is bowing into the tannins, the bees are whistling Dixie, the alamanda bush is popping purple fuses, and everything's out of control too wet for words.

Posted by Gerald Hausman at 10:50 AM No comments:

the man with the panama hat

He reminded us of the Curious George books. When our electricity was down during a bad storm, he came and inspected the electric box. There was something different about him. There was, in a manner of speaking, light coming out of him. An energy of soft-spoken, kindly goodwill. As if he'd already fixed our problem before he'd begun to look at it.

After he left, the lights came on inside the house. I went outside and cautiously lifted the electric box hatch. There was a piece of paper pasted to the metal on the inside of the box. It said: "God bless the people who live in this house."

The hurricanes that season were Bonnie, Charley, Francis, Jeanne and the following year, Wilma, Katrina and others I can't remember now. We got through each and every one. Thanks to the man in the panama hat ... and the man upstairs ... he's still there, they're both there ... haven't you read their messages?

-- From the one-page novel, A Raga for Ragga Island, published by Longhouse, one of the oldest, longest-standing-still-printing alternative presses in America. 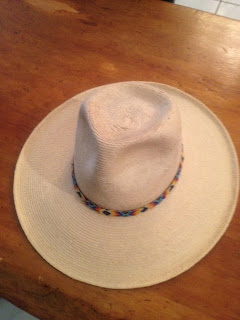 Posted by Gerald Hausman at 2:06 PM No comments:


Have you noticed she's not around but he is?

I remember a very proper Jamaican lady telling me not long ago, "We have lost a generation or two."

By which she meant, Miss Manners was on vacation. Anyone who has been on a country bus in Jamaica may have an inkling of what she meant. But what about America?

I would say it's much worse here. Public rest rooms are light years away from when I was growing up.

I'm not talking about small children making mistakes. I'm talking about sloppy men who  know better and don't care. We used to say, Excuse the pigs, the hogs will be along later. But that doesn't work metaphorically. Pigs are actually very clean. Humans are not.

There was a sign in the main hall of the grammar school I attended in the 1950s and it said -- THMINK. There was another one that showed the picture of a doofus with a goofy grin. He was saying, "Last year I could not evun spell Enjuneer, and now I are one!"

My mom was a stickler for detail. She instructed me to put the toilet seat down after use. There was a great maternal thing going on in the fifties. Women weren't running things as much as they were informing and shaping them. My mom was anyway.

My mom's gone. But I would still like to think Miss Manners is out there. Or that Mr Sloppy might wake up to the Golden Rule. I saw a sign in the restroom of a local restaurant that gave me some hope. The sign said -- "We aim to please. Will you please aim?"
Posted by Gerald Hausman at 11:35 AM No comments: