While this America settles in the mould of its vulgarity, heavily
thickening to empire,
And protest, only a bubble in the molten mass, pops and sighs
out, and the mass hardens,

I sadly smiling remember that the flower fades to make fruit, the
fruit rots to make earth.
Out of the mother; and through the spring exultances, ripeness
and decadence; and home to the mother.

You making haste haste on decay: not blameworthy; life is good,
be it stubbornly long or suddenly
A mortal splendor: meteors are not needed less than mountains:
shine, perishing republic.

But for my children, I would have them keep their distance
from the thickening center; corruption
Never has been compulsory, when the cities lie at the monster's
feet there are left the mountains.

And boys, be in nothing so moderate as in love of man, a
clever servant, insufferable master.
There is the trap that catches noblest spirits, that caught -- they
say -- God, when he walked on earth.


This unusually great poem was in my mother's handbook of modern verse, circa 1924.
She was fond of Jeffers and his love of nature and his fear of man. It seems like the bitterest
of aspic, the toughest of thistle, the poison that finished off the Roman emperors. But Jeffers was a devoted father, loving husband and friend of humankind and his poetry shows that he was one of the deepest thinkers of his age and now our own. I read this poem aloud to an audience in 1965 and it was thought to be a current poem by a Beat poet. Today it reads like a critique of the election results.

Posted by Gerald Hausman at 2:52 PM No comments:

I remember our daily runs in the summer of 1983. We were in Southeastern Utah running the canyons. Often barefoot. Swimming the rock walled sink holes. Eating red meat over red embers. We outran a flash-flood. Burned our skin in biting dust. Soothed it cool shadows of willow. Dan and Fred were the runners, I was just glad I could keep up some as we went along and I scribbled my notes, following the path of Big Wanderer, the wolf of Navajo myth.

Now -- in a sudden moment -- Dan is gone. But I keep him close; always have, always will.

This is a celebration of his memory.

How far to the bridge? I ask
You can hear it, he says
How beautiful the canyon wren
At five hundred feet
Playing the flash-flood
Like a bowstring 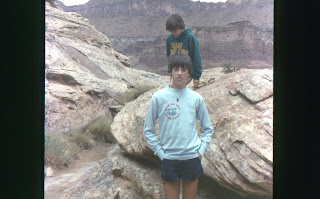 Posted by Gerald Hausman at 9:38 AM No comments: 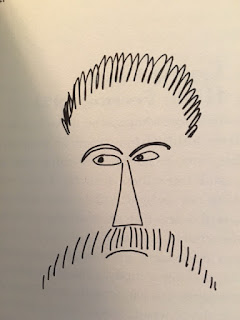 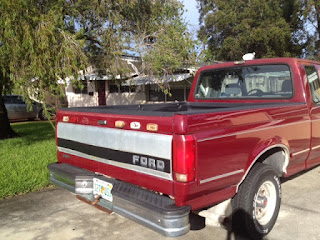 I saw a man in the parking lot of a school I visited and he was bent over staring at the bumper of my 1993 Ford F-150 pick-up truck.

The man sighed, shook his head and laughed. "Just look at that bumper, solid metal." He banged it with his knuckle. "All metal and chrome."

I nodded. "You say it gets you around? Where to and where from?"

I laughed, remembering. "My best friend drove it into the ditch."

"What'd he think it was, a flying horse? Any more?"

"Well, it was in a hurricane and made it through but my neighbor across the street, well, his RV got picked up in the air and when it came down it flattened his mom's caddy."

"Well, let's see. My wife gave it those racing stripes. They were made by our farm gate."

"Well I'll tell ya," the man said, "one day you're going to thank this old gal for saving ya when someone backs into ya."

Yesterday in the parking lot at Publix I was remembering that funny old guy when, right then someone backed into my F-150.

The driver couldn't see out of his back window because it was all steamed up but that didn't slow him down any.

When I checked the damage the score was Ford F-150 one, blind driver zero. His back end was crunched so bad some of it fell off in the parking lot. "It wasn't my fault," he sputtered, "I was just let out of the hospital, and now look what I've gone and done."

The old gal, my Ford F-150 didn't have a mark on her even though my jaw was still quivering from the jolt.

Old Gal, God bless you
and Henry Ford too!