Ross LewAllen: The Wolf and the Typewriter 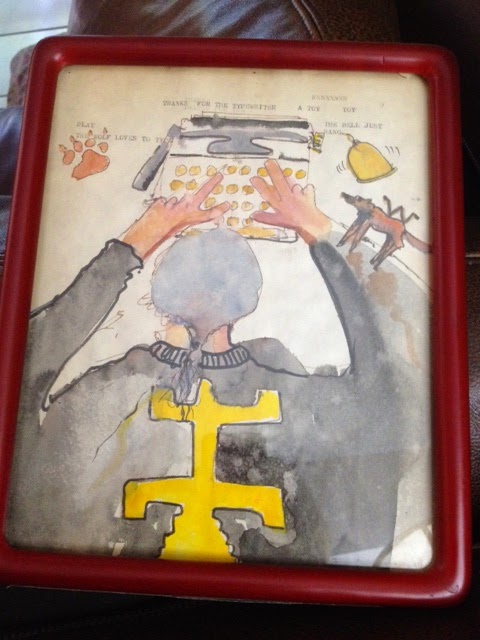 This is a story of friendship. And of mutual love and reciprocity.

My friend Ross once asked me, "How do you get rid of writing doubts?"

I asked, "Where did they come from?"

He thought about that for a while and then said, "From an elementary school teacher long ago, I was told that I was no good at writing." From that point on I stuck to drawings, painting, anything but writing. But you like my poems, so maybe I can write after all."

"You could always write, Ross. But maybe you were carrying that grammar school teacher around on your shoulder."

"I think I'll carry a wolf on my shoulder from now on. Thanks, Bro."

A few days later I gave Ross the portable typewriter you see in his painting.

A few days after this, he gave me the pen you see in our photograph.

Ross is a love beyond measure, beyond friendship, beyond everything but the breath we breathe. 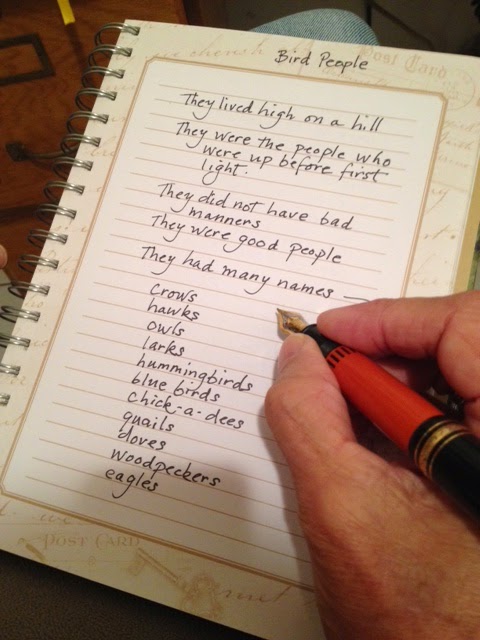 Posted by Gerald Hausman at 9:13 AM No comments: 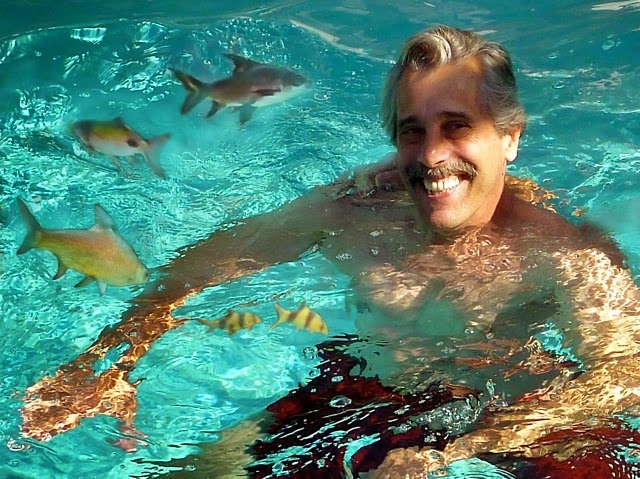 We all have stories where something happens to us that we cannot explain. This one came out in my collection The American Storybag. Almost immediately I received some emails and other direct responses from kids who asked, "Is this story true?"I would say to them: "All stories are true. This one happened as I said it did. But, then again, I was seven and my cousin was five."

My cousin Kyle said to me, “Do you remember the little room on the third floor of Grandad’s lodge overlooking the lake?”

“I remember it--not much bigger than a closet.  There were two pieces of furniture -- a marble table and an old rotten, horsehair chair.”

Kyle said, “When we were five we’d go into that secret room when no one was looking.”

"Our parents thought we were fast asleep."  Kyle laughed, a little hysterically, I thought, but, yeah, it was kind of funny the idea that we were together in the shadow room with the big gloomy chair.

It was coming back in more detail.  The narrow steep stairs winding up to the third floor.  The creaky door to the secret room.  The knotty-pine closeness of the walls.  The absence of breathable air.  The dust.  The secretness.  The horsehair smell.  The moon on a thousand year old, threadbare oriental carpet.

There was the old chair, so vast and solid, a kind of personage that beckoned children to sit on it.  Yes, it had powers, all right.

We crept up to the chair and inched our way up onto the sprung horsehair cushion.  The chair smelled ratty and rotten.  The room so airless and close, as if whatever lived within the walls needed every bit of oxygen that was available, and none left for a couple of errant and disobedient kids.

Suddenly it was clear to me why the chair was so special.

It transported us to places we didn’t want to go.

Settled into its cavernous bulk, the chair somehow blasted off like a rocket, flew us out of the Lodge and skimmed us across the lake.

Not only that, it skimmed us under the lake.  Then it soared us into the clouds, and above the clouds, took us into outer space, sent us into the Milky Way where we tailed the tails of comets.

And then, always and forever buried in my memory, the old chair turned around and brought us home.

We'd blink -- and there we'd be in that stuffy, small, airtight room that smelled of one hundred years of dust.

I remember that, one night, Kyle met me in the darkened hall in front of the secret room, and she whispered, “Tonight we’re going to do something different.”

“Come, I’ll show you.”  Kyle was both mysterious and mischievous and I often forgot she was my cousin, more like some magical, dreamed-up friend from a storybook.

Soon we were seated, elbow to elbow, in the chair.

I remember how the chair was woven of twigs, millions of strands of twigs and it was, in reality, a once upon a time tree that was now a square, squat painted tree that looked like a chair and had horsehair cushions, bottom and back.

So we sat together, Kyle and I, and the chair rocked out of the secret room and into the open night of sundry stars.

All was well until Kyle screamed at me -- “Let go of the chair!”

And then my cousin Kyle went spiraling off into space.

She was tumbling and rolling, while I held onto the arms of the chair until, at last, it upended me and then I was floating around  in the heavens with Kyle.  We were flying, I guess.  Not like Peter and Wendy or the Lost Boys because there was no sense of self, there was only space, emptiness, void, air, wind, volume of nothingness, white noise of moonlight, and us moving through it, invisibly and immaterially.

We were, and we sort of weren’t.

We were not flying so much as we were flight itself.  We were like the thought of flight.  Miraculously detached, unloosed from the world.

And always, at the end of the ride, the old trustworthy chair scooped us up and brought back to the airless attic, secret room.

Some months later, Grandad lost all of his money and the lodge was sold for petty cash.

The old chair went with the Lodge.

We did not think about the strangeness of this.  The place where we grew up -- gone.  Not lived in by us anymore, inhabited by someone else.

Thus did we grow up, and forget what it meant to be transported by magic.

Kyle and I got older, and then, just plain old, as I'm afraid we are now.  But we still laughed a lot and from doing this, we had laugh lines and lots of wrinkles.

Well, as it happened, one day a few months ago, we were sitting on the dock by the lake below the hilltop where the Lodge had been – it burned to the ground in the 1970s -- and a big wind came up out of nowhere.

Kyle’s beach chair, and mine, didn’t move because we sat hard upon them, waiting for the wind to go away.

It did, finally, but then, when we weren't expecting it, the wind returned and knocked Kyle and me into the lake.

Kyle laughed.  “Can you still hold your breath like you used to?”

I dived down.  The lake was as clear as the air above it.

After swimming for a while, I felt chilled. “Kyle, I’m getting cold.”

I swam around some more, staring into the wondrous clarity of the lake.

The old horsehair chair.  Kyle and I were flying above the ancient, rotten horsehair chair. We touched the twiggy green-painted, woven arms and then the sprung matting of the cushion . . . and . . . it happened all over again.


We were both seated upon the chair underwater.


Then we flew, raced in and out of spiral coves and caves.  The chair took us to the swamp, scattering turtles and herons, and there was that instantly familiar release that knows no bounds, that unlimited non-human form. . . flying, we flew. . . out of body, we abandoned our bones and entered that unknown, unknowable zone of pure flight, of the thought of flight, and then of nothing, nothing at all.


When, at last, we dragged the aluminum dock chair onto the dock, I was shivering and shaking, and I started jabbering about flying but Kyle said, “Let’s not tell anyone about this.”  And I haven't -- until now.

Posted by Gerald Hausman at 8:28 AM No comments: