Another Way of Looking at Jan Wiener by Joseph Koch 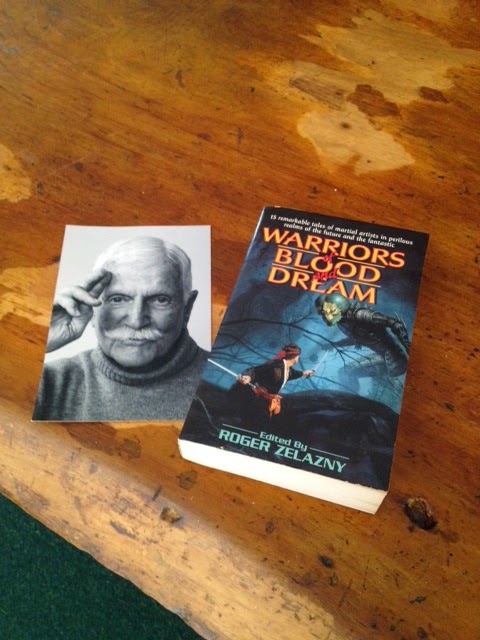 Once in a blue moon, if then, something in a story resonates to such a degree that it becomes a life-changing moment. As Jan Wiener changed my life, Joseph Koch was changed by a story about Jan. I wrote the story in 1994 for an anthology edited by my friend Roger Zelazny. I remember when the book came out Jan read the story and smiling said, "Well, you romanticized me but that's all right. Don't worry, I'll never tell." My turn to smile, I said, "It's fiction, no need not to tell." We both laughed.

If You See Your Past On The Road, Kill It
by J. Koch

“You don’t seem to understand,” he said, “that you are alive. Who cares about your handicap? You must turn your injury into something vital, a weapon to cancel the past.” -- Jan Volta

I have been carrying the above quote around in my head since 1995. It has been like a personal koan for me. I found it in the short story "Eye of the Falcon" by Gerald Hausman which was published in an anthology Warriors of Blood and Dream edited by Roger Zelazny  Recently Mr. Hausman told me that Jan Wiener was the real name of the character in his story. I suppose by calling his friend and teacher by the fictitious name of Jan Volta, the author got a little distance and some added poetic license when he wrote his tale about the martial arts. What attracted me to Volta though was his tough, brazen disregard for self-pity of any kind.

I understood the "who cares?" aspect of Volta's comments well enough, but I wondered for a long time how something I've put up with, worked around, accepted, fought, and wept over could possibly be any kind of weapon. How could a thing I've had since birth cancel my past? That was my conundrum. And it is why I have called it my koan. I had to solve the question.

In Mr. Hausman’s story, the protagonist arrives in Jamaica after many years to run in a marathon. He encounters Jan Volta, master of an obscure, but venerated Czechoslovakian athletics and martial arts regimen called Sokol, or “Falcon”. Our main character is very fit, having welded his body back into working order after a "crippling accident". While they train, Master Volta shows absolutely no mercy at all. The protagonist tells Volta about his accident, the pain it caused, and what he suffered. Volta is unimpressed, our protagonist is offended, and tells him so.  My opening quote is Master Volta’s reply. Master Volta lived through World War II, trained men that fought the Nazis, and fought them himself.

I've had spastic cerebral palsy since birth.  I fall often. Forty years later I’m still painfully embarrassed, to the point of growling things like, “I’m fine!” when people are just trying to help me. I don’t walk well.  I have to plan my movements a piece at a time in my head. Sometimes I lurch about, knocking things over when I reach for them, stumbling, almost throwing myself into chairs when I sit. My first trip to the bathroom each day is always an adventure. Nevertheless, I’ve been drawn to martial arts practice all my life. On the days I can stand, I can throw punches and blocking combinations well enough that my teacher thought I was “pretty fast.”

My wife is a big part of why I understand Master Volta better now. A lesser being would have shriveled up in a corner and died.  Instead, my wife used the need to take care of her daughter, and her poor health to move past what came before.

Doing daily tasks is harder for us and takes more effort that it does for a “normal” person.  Not impossible, just harder. We have a certain amount of mental, emotional, physical effort to devote to anything at any given time. Filling up too much of our mental/physical/emotional hard drives with, “Woe is me!” makes that even harder.

A disability is a weapon because you can use it, in that way, if you know how, and if you have the will to do it.

We can sit and mope about our pasts, or use our troubles walking across a room, doing laundry, and doing dishes, to cancel the past and keep going. We’re both far from perfect; what I’m telling you doesn’t work perfectly every single day.  But my wife told me something early on that always stuck with me: “Effort always counts.”

As in meditation, “You became distracted? OK, stop and start again.”

We have our weapons to cancel our past. We can always pick them up and wield them.

Posted by Gerald Hausman at 9:43 AM No comments: