ALL IS BEAUTIFUL ALL AROUND ME

All Is Beautiful All Around Me:
Navajo Ways and Ceremonial Stories 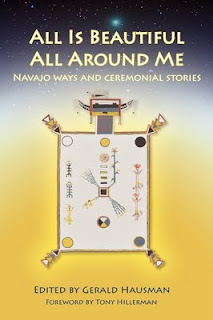 When Tony Hillerman in his foreword to this book said that the Navajos were "engulfed by a dominant materialistic society hostile to their ways, and how they maintained a culture that values human relationships above material possessions..." he was not only honoring this one tribe, but in a way, all tribes, all people, all civilizations that simply refuse to go away when told to leave.  In 1965, while camping with some of my Navajo friends, I asked how they had done it.  How they had managed to survive when, in the 19th century, they were nearly eradicated by Kit Carson and the "bluecoats" who served him.  A genocide had taken place, the Navajos had survived it and had become over time the largest indigenous tribe in North America and maybe even the world.  How had they done it?  One of my best friends said, "By not dying."  All Is Beautiful All Around Me explains how to live in harmony with all things.  It teaches how to live in peace in a world at war.  It shows how one can "go in beauty" as Tony Hillerman says.  Frank Waters, author of Book of the Hopi, said: "This oral equivalent of the Christian Bible loses none of its power and significance in its easy readability."  I wanted it to be open and clear, as accessible as the storytellers who helped me to see how the tribe had managed to be what it was, is, and always will be.  As a map to the human heart, this book is my favorite above all others.
Posted by Gerald Hausman at 7:46 AM No comments: