I was remembering this morning one of the things that drew me from the mesas of New Mexico to the pine flats of Florida. A friend of mine Jonathan Huntress gave me a book by John D. MacDonald.

The interesting thing is that, at the time, I was no mystery fan. And I wasn't very much interested in Florida. I was sitting under a turquoise sky looking out at miles of chamisa, pinon pine and wide empty space.

But Jon Huntress was a very good friend and if he thought MacDonald was good, I thought I'd give him a try. I did. Forty novels later I was packing for Florida. There were daughters to see, an empty nest to get out of, and many beaches to jog and tides to swim.

This morning I picked up a well-thumbed copy of The Lonely Silver Rain by John D. MacDonald. I turned randomly to page 43. Was that old magic still there after 20 years of being a writer who lived on a barrier island myself? Was Travis McGee, Mac's hunchy and hunky hero, still as cool as the day I first met him on a mass-market page of faded ink? I shrugged. We'll see. And glanced at page 43 wherein McGee, the old salvage snoop, was going to inspect a boat tucked into the mangroves:

"At first light on Thursday morning I headed out from a place named Faulkner's Fish Camp on Ramrod Key in a wooden skiff with a 20-horse motor, beer cooler, fly dope, tackle, tackle box, ten power binoculars and a bait pail full of apprehensive shrimp. I pushed it as fast as the rig would go, and when I got to the area I got lost three or four times among the wrong islands before, at high noon, I found the channel into the little bay protected on one side by the horseshoe island and on the other by a long narrow mangrove island. There was a gentle breeze from the north, just enough to riffle the surface of the bay. She was there, and the closer I got to her, the more disreputable she looked -- like an elegant lady who had stepped into the wrong bar on New Year's Eve."

I was caught, stuck, apprehensive like those trapped bait shrimp. MacDonald had me and he was going to have his way with me for another 277 pages. It's simple, really. The reason why the guileless reader reads on. As E.M. Forster once said, it's all about turning the page.

In that moment of spellbound reading I was sent back 20 years into a turquoise day in New Mexico when, crazy as it seemed to me then, I would even consider moving to Florida. What was the old magic?

Well, it's page-turning stuff about fish camps, mangrove keys, tackle boxes and shrimp that don't want to be in a bait pail. "I got lost three or four times among the wrong islands before, at high noon, I found the channel into the little bay ..."

Even if you aren't interested in anything Florida has to offer, there is a universal understanding among men and women that the words "lost" and "high noon" and "channels" and "little bays" are intriguing, and you have to ask yourself that age-old question -- what happens next?

There's "gentle breeze" and "riffle", softly reassuring, but the boat McGee's looking for is "like an elegant lady who had stepped into the wrong bar on New Year's Eve." All of these got me. They got me wondering, so I read on and came to the part about the turkey buzzards we know so well down here and the carrion flies. The lady is of course the missing boat, what's in her is startling ....

"It is one thing to look at a mistreated boat and another to look at a tomb. The silence of the bay seemed more intense. And I could see the glint of the carrion flies."

I read on. I had to. Mac had me. If you were to ask me why, I would have to revert to type -- the creative writing teacher that I once was, the recovering teacher that I now am. The detail! The exactitude! The essence of place! The sense of something's going to happen but we don't know what it is. We want to know. But we can't ... unless we read on. And that is the secret. Each line must lead to the next. Each paragraph must fulfill its promise and lead to the one after that. And thus we ride the wave all the way to the final shore. 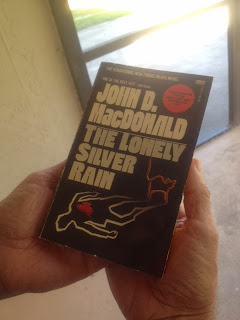 Posted by Gerald Hausman at 11:47 AM No comments:

Mike Gleeson, Most Interesting Man in the World

Four years ago the most interesting man in the world passed into the "next experience" as he sometimes called it.

Some 25 years before, the two of us were horseback riding on a hilltop in Questa, New Mexico above the hacienda where he and his wife Michele lived. We, Lorry and I, were staying with them. I was on a leave of absence from my teaching job at Santa Fe Preparatory, and it amazed me to think I was not in the classroom. The leaves were turning, it was October, my birthday, and I was riding the range with my friend Mike Gleeson, the most interesting man in the world, and I was free as a bee on the back of a horse. How was this even possible?

Mike was a mind reader, as everyone knows who knew him. He looked over at me, saw the gleam in my eye and said with smile, "Hey, Gerry, no one said you couldn't do it." By which he meant more than I could've said at that moment or any moment, even now, but I'm going to try.

He followed this up with, "Just think, you could be stuck in some office somewhere bent over a ledger book like Bartleby the Scrivener!" And so saying he learned over the saddle horn, reins in his lap, and pretended to do some ciphering. Then he exploded with laughter and his horse whinnied and both of roared in the gold blaze of that lazy autumn afternoon.

"Now let's get some war paint," Mike said. And I suddenly remembered our mission -- to go the  secret cave where the Taosenos actually got the red rocks that, when you wetted them, made war paint. It was a mission of holiness that I was sharing with the most interesting man in the world.

God bless him, and may he be riding steeds on the heavenly mesas right now.

Ride in peace.
Posted by Gerald Hausman at 8:32 AM No comments: