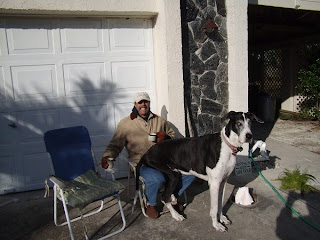 Zora was a runaway. A rescue dog from Hurricane Katrina who, during the storm got run over by a truck. Hip-shattered and in the road, she was picked up by a vet, operated on, healed and put up for adoption. Some nice folks from Pine Island, Florida adopted her. But Zora had a habit of running away. She ran this way and that, got lost in the mangroves, ran down the road that links St James City to the south with Bokeelia to the north. Lots of people knew Zora -- a dog as big as a small horse trotting to who-knows-where isn't invisible.

I met her at the Pineland Post Office, which I believe is the second smallest PO in Florida. There she sprawled, all seven feet of her, head to tail. And when someone new walked in, her head popped up, she looked, and lay down. It was as if she were searching for someone. We adopted her from the people who had adopted her who got her from the vet who saved her from being run over more than once.

One of our first days with Zora she slipped through the front gate and ran down the white shell road, turned right and headed for the old runway for small planes. I jogged along after her for about two miles or so. She's not going into Matlacha Pass, is she? Yes, she was. And did. I swam after her. The water deepened as I got hold of her collar and turned her about and sort of hauled in to shore. We were both out of breath. She looked me in the eye. "Is this the way it's going to be?" I asked. She looked up at the sky seeking a rift in the clouds. She studied the solid wall of mangroves seeking a break in the leaves.

That was nine years ago. Zora did settle down, mostly on my lap as you see in the photograph. That was her favorite place to be when it stormed, and it storms a lot in the summer on Pine Island. Sometimes when the thunder was thunderin' and you happened to be sitting on the toilet, she bumped open the bathroom door with her nose, came in and sat down on your knees.

When Zora wasn't running away or sitting on you, she was stepping on you. How I miss, now that she's gone, that reminder of how heavy a big Great Dane is. She weighed anywhere from 150-160. And when her full weight was on your bare toes, you really felt the presence of that dog. Another thing -- her head was always at perfect level with your dinner plate. Once she sunk her teeth into a block of Spanish smoked cheese from BJs. She liked the block so much she didn't eat it, just carried it proudly around the kitchen. That enabled us to disengage it and shave it where she'd slobbered, but her tooth marks were always there.

Now all these things weigh heavy as I type. Her teeth went deep into that cheese, but her love went much deeper into my heart. I wish she'd come and stand on my foot. I wish I could run down the landing field to find her swimming to Cuba: I wish she'd come sit on my knees. A wish is a wish. But a dog is a dog.
Posted by Gerald Hausman at 12:53 PM 3 comments: 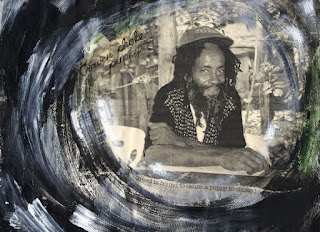 
A new review of Rastafarian Children of Solomon from Culture Magazine:

If your knowledge of Rastas begins and ends with your worn copy of Bob Marley’s Legend . . . then, my friends, you need a culture bomb thrown at your front door. No, dear friends, the ideas and concepts behind the Rastafarian movement that took root in Jamaica during the 1930s go way beyond reggae music and giant spliffs—though they are connected. Here, author and storyteller Gerald Hausman tells the stories of Rastas, or the “Children of Solomon,” in his and their words. From farmers to healers, to Rasta elders and fisherman, Hausman uses colorful words and first-hand experience to powerfully describe his subjects: “Mackie [McDonough] knows his history, his story; and his face is a finely carved mask of inscrutable character. He can stare down a stump, as the expression is, and he fears no man or woman . . .” Or in the case of Horace “Winston” Churchill: “His twinkle-eye and easy smile could charm a snake, and probably have.” Hausman’s Rastas leap beyond the confines of any mere album cover. Even Bob’s.

They reason they do, if they do, is because the people I have written about are real people leading their normal, irie lives on the North Coast of Jamaica. Some are gone now because I began writing the book in 1985 and a lot has happened since then. When we first came to the island the currency was one to five. That is, one "Sammy dollar" as Tosh put it for five Jamaican "smalls." Now it is one U.S. for 90 JA. If you do not understand the politics of grinding poverty, you cannot begin to understand the love of blinding vanity that separates rich from poor, haves from have nots.

In spite of the economic crisis in Jamaica, the Rastafarians have, in general, risen above it as Bob Marley and many others said they would. Their message -- how to break the mental chains that bind us -- is the substance of this book.  As they still say in Jamaica: "Walk good!" For walking for something, as they also say, is better than sitting down for nothing.

Posted by Gerald Hausman at 11:25 AM No comments: