Friends of ours have said over the years, "Why don't you write a book about George?"

But we had no real intention of doing it.  Why?  Because George is a pain in the butt.  He's also a family member and we've lived with him and taken care of him for more than thirty years.  We took care of his brother too, but he died.

George has been through many life adventures with us.  I don't know what we'd do without him.  I don't know what we do with him either.  He's just there -- for weddings, funerals, parties, economic and tropical depressions -- he actually rode out Hurricane Charley in our kitchen without one single comment.  But the other day when Lorry was wondering what to make for dinner and was saying something about it, George looked at her, cocked his head, said, "Need some help?"

For a Blue-fronted Amazonian parrot, George is a talker who sometimes beats the vocabulary of an African Grey, and they are often considered the most reliably talkative parrots around.

George has had many near death experiences and he has noted them verbally.  When he was lost in the Florida woods for a dark dismal summer day in which hawks tried to kill him (he hid under palmettos and walked like a dog trying to find his way home), we finally met up with him on the shell road in front of our house, and he glared at me and said, "What took you so long?" 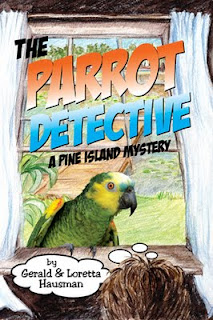 Our new book The Parrot Detective is for anyone who likes animals, reptiles, people, parrots, lizards, turtles, FLORIDA (and that includes crackers, the real kind not the made up variety) and funny stories about boys who grow up with odd family members.  The narrator is Miccosukee and he lives on this crazy little barrier island where we live -- Pine Island.  This is the first in a series of mysteries about our island.  The next one will have more unaccountable mischief in it and more GEORGE, because that's what you asked for... literally.  Kids and old timers and just about everybody else, including George himself -- he just now walked into our office! -- said, "Stop writing other stuff!"  So there he is right now sitting on the Great Dane's bed.  I think that's a smile on his beak.
Posted by Gerald Hausman at 8:23 AM 2 comments: