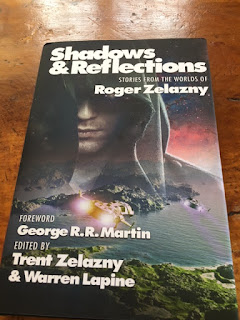 This anthology, long in coming, was deeply desired by the many fans of Sci-fi-fantasy master, Roger Zelazny. Everything in its right time. But it seems a long time, to me, since Roger was here on this earth. And yet it also seems he was just here, just passing through, just a moment ago.

Time bends and sometimes we bend with it. Roger knew that all too well. He died June 14, 1995. Some months before he passed he phoned me to say he'd had a dream in which a bunch of characters came to him asking to be worked into a novel.

Anyone who has read the Amber novels knows that time bends in Roger's books. And, for a while on the phone, he bent my ear to a proposal. He wanted me to write a novel about the dream he'd just had.
It was a kind of detective story, in which the main character was a world weary martial artist whose specialty was ... he left that up to me.

I suggested a stick fighter because I had just returned from Jamaica and had seen one. If you've watched any of the old Errol Flynn films (the actor actually lived on the North Coast of Jamaica), you can imagine what a stick fighter does to protect himself. Basically, Robin and Little John. Parry and thrust, pound and pummel, all done with the grace and style of a dancer.

Roger went on to describe the main character as a kind of salvage expert, a guy like Travis McGee in John D. MacDonald's The Deep Blue Goodbye. It all sounded very exciting, this proposed novel, except that, unlike Wilderness which we had written together, Roger wanted me to write this one alone.

He also asked for a character who looked and acted like Sean Connery in Doctor No. He wanted this fellow to pop into the tale at odd, inventive moments. "Could he be a stick fighter, too?" I asked. He said, "Sure." I described how the Connery character might appear and disappear and he suggested that he just walk out of a cane field in formal attire, as if he were going to a high stakes game of baccarat.

Roger asked that the main guy, the salvage expert detective, be what he termed a flawed character. Someone between jobs, between affairs, between worlds. He might be a man of affairs with no affair, but with a flair for stick fighting. Then he caught me with his next comment: "How about an older man, or even an old man?" I laughed and said I knew one such in Kingston. A very urbane old guy who was actually the Queen's Magistrate. Roger chuckled. "Perfect," he said.

I never wrote it. I wanted to. But after he was gone in 1995, I turned to children's books about Jamaica and the editing of a number of books written by Bob Marley that came out under the Marley family imprint of Tuff Gong Books.

Long story short -- or rather long story long -- I was compelled to write Roger's tale when Warren Lapine and Trent Zelazny asked for a contribution to Shadows and Reflections. It came quickly, the story that was more than 15 years old and unwritten. Time bends. And I like to think Roger lent more than a helping hand. I like to think he's still here, don't you?

Posted by Gerald Hausman at 9:45 AM